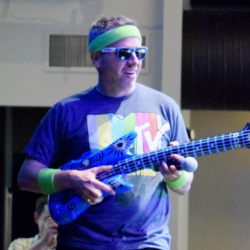 Imagine a world where different generations truly understand one another. A world where rainbow unicorns run rampant, and maybe if you imagine hard enough a world where MTV still plays music. For five brief minutes at DisruptHR that was the world I encouraged the crowd to believe.

The thing about DisruptHR is not that you are going in front of 200 of your closest HR friends, but that you only have five minutes to get your points across. It’s a whirlwind of energy, pressure and even emotions, but also an opportunity to have fun and explore new concepts.

As the youngest of four children I grew up as the baby and was used to being the one that got all the attention. Now, as a proud Gen Xer I’ve become the proverbial middle child of the generations. From this middle spot, we might seem to be forgotten, but in reality it’s because we’re equipped to bridge the gap between Millennials and Baby Boomers to solve the talent shortage.

I have a few recommendations from this middle perspective:

Each generation has its own superpower. For those of us in Generation X, it’s our responsibility to find a way to harness it together.

I feel the current talent shortage every day in my business as clients ask for help with identifying difficult-to-fill positions like Compensation Analyst, Payroll Managers, HR Technologists, etc. In doing my research for this preparation, I came across the staggering fact that 40% of companies are feeling the talent shortage and the pure mass exodus of Baby Boomers could cripple the US workforce.

If you were to peek at early versions of my presentation you would notice a fairly major concept that I took out. And while it may be a controversial topic to some, that wasn’t why it ended up on the cutting room floor. While it ties into the idea of generations, it took too much away from the other points. However, I think it’s incredibly important to think about because of its lasting impact on how the generations have formed.

The FDA approved “the pill” 1957. Gen X is the first generation whose birth numbers were impacted by the revolutionary drug. It probably then comes as little surprise that as a result there are between 10-15 million less Gen Xers than Baby Boomers, Millennials, and Gen Z (and depending on how you look at it, Gen Zers are still being born).

What I did focus on in preparing for DisruptHR was taking a trip down memory lane and looking at things from my childhood – most specifically MTV. It was a cornerstone of the Gen X generation, and the musical choices caused me to reminisce many of my favorite tunes. My goals for my presentation were simple: have fun, make people laugh and share a few thought-provoking ideas. 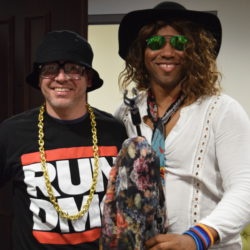 For my presentation I dared to be different and enter with “walk-up” music. Thanks to Thom I was able to patch in the intro of “Money for Nothing” by Dire Straits. I have to admit that my heart was pumping while waiting backstage while the music started playing. Was I going to completely embarrass myself? Were people going to think that I was a little crazy? At this point, I had no choice but to give my presentation all of my gusto and “let it rip!”

But the intro music was literally just the beginning. I was completely prepared to take it a disruptive step further and dress up as Rev Run (from Run D.M.C.) with my very own Steven Tyler aka George Sample. As the end of my presentation came near, how was the crowd going to react? Was it going to flop or would people “walk this way” with me?

It may not be the most appropriate song, but it perfectly illustrates what happens when two generations and types get together. By combining the strengths of two opposites – rock and rap – to create a Billboard chart topper and a song that crossed generations, reviving Aerosmith’s reputation and introducing Run DMC to the mainstream.

The end was the best part. It was exhilarating, fun, and challenging to get back on the stage and present at my favorite event, DisruptHR. As my “five minutes of fame” flew by, I knew that not only had I done something completely different at an event formed around disruption, but also that I had hit home with the feeling of pain that the talent shortage is causing our clients.

Five More Creative Ways to “Tell Me About ...

What is So Special About Willory’s Culture?

Tips on how to Succeed in Digital Marketing

How to get the Best Affordable Gaming Laptop computer

Ways to get the ExpressVPN Activation Code