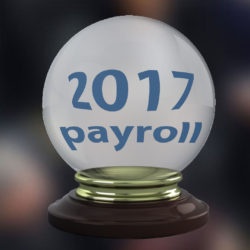 As a culture we’re obsessed with the future and this includes planning and predicting what’s to come in the following year. In case you’ve missed the news, 2017 is sure to bring with it a lot of change.

The title of this post is a bit of a misnomer. The payroll world is an unknown and surely difficult to make hard and fast predictions. Any first year of a presidential term carries a bit of uncertainty, and 2017 is no different. As presidential politics showed us a few months ago – predictions are really hard, but let’s keep an eye on the following topics:

Bonus: I do have one prediction for 2017 – The Mobile Workforce Bill passed in Congress back in September, and is sitting with the Senate right now.  I think it will pass in 2017.  This is a win for employers.

Are these items and other payroll activities stressing you out? By having a thorough payroll assessment completed each year, you ensure your organization is compliant and operating in a way that is beneficial to the company and its organization. Use the contact form below if you need help completing your 2017 payroll assessment.

Principal/Representative Considerations (Gross versus Net) in the ASC 606