Is Your Organization A Circle of Trust? 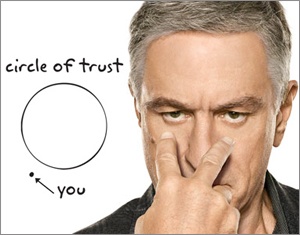 I came across a study today about employee trust – or a lack thereof as I listened to a Wall Street Journal podcast.

More than half of American workers (52%) don’t feel their feel the company is upfront and honest with them, meanwhile a quarter of employees (24%) do not trust their employer at all. Woah.

An American Psychological Association (APA) study conducted earlier this year showed that there is clearly and abundance of uneasy workers. But a little unease is normal, right? What could happen? Well the APA’s study makes it pretty clear what could happen as 27% of U.S. workers said they intend to look for a new job in the coming year.

Be more transparent.
Provide regular business updates, promoting wins and success. Share insight into the financial health of your company, letting your employees know that they work for a stable company. If times are tough, be open without creating a panic. The worst thing you can do is lie followed closely by saying nothing. Closed doors and a lack of information makes employees nervous and unproductive.

Reward your employees.
Many of your best, most loyal employees have been taking it on the chin in terms of stagnant wages and increased responsibilities over the course of the recession. If your business is healthier now, spread the wealth. No one is telling you to be irresponsible, but eventually your employees will notice and turn on you if belt-tightening-mode becomes a permanent way of doing business.

In our profession no one knows better than us that disengaged and unhappy workers are less effective. And these same people bring morale down around them and make it more difficult to attract top talent. Meanwhile the APA study revealed something we already knew – employees who felt valued by their employer are more motivated to do their best (91%) and to recommend their employer to others (85%).

Don’t Let the Annual Review Sneak Up on ...