Time Wasters and You 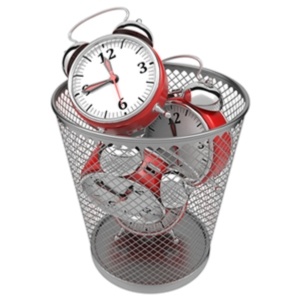 Last month we (as we do every year) heard about the productivity hit U.S. businesses would feel due to employees wasting time watching March Madness. Nearly $2 billion reported one study. While that is certainly a big number, what’s most interesting is that while March Madness is cited every year as the apocalypse of time wasting, only 13% of workers in salary.com’s 2014 annual survey said they spend “work time” on the tournament.

And while 13% are wasting time on the tournament in March, a whopping 89% of professionals surveyed said they waste time at work – up from 69% the year prior.

So where is all of this waste coming from? Of course our first inkling is to the Internet and time online. Google and Facebook are the biggest offenders at 24% and 23% respectively while way down the list is ESPN at 2%.

And right behind the Internet as biggest time waster? “Too many meetings and conference calls” came in at 24%. Which honestly, seems low (see blog on how to make meetings more efficient).

The most productive, least time-wasting period of the day is between 9 am and 11 am. And no age group stands out as a particular offender of wasting time as almost all age groups have at least 85% admitting that they waste time.

So what do “we” do about this? Only 27% of respondents said their workplace blocked non-work-related websites, slightly lower than the year before. And blocking really is not having the desired effect as most who are blocked reported simply using their personal smart device. On the other hand, many surveyed said that these blocking tactics would lead them to consider leaving (8%) their place of employment or not taking an offer at all (14%). That could be a heavy price to pay in terms of attraction and retention for blocking Facebook or ESPN.

All of this being said, are time wasters really bad?   Wasting time on its face appears to lead to a loss in productivity. Meanwhile more than half (53%) of professionals surveyed do so recharge with short breaks to increase productivity. That’s good, right?

BUT there are areas you should examine where time wasters are clearly a red flag that you are either not challenging your employees or you have employees that don’t fit the expectations of their role. One in five (20%) said they waste time because they are bored or not fully engaged in their job. Other “bad” causes of time wasting include a lack of incentive/motivation (8%) and being unsatisfied (7%).

Take the time to get to know what your employees are doing and if their “time wasters” are recharging them or a sign of a bad fit. And next year when those March Madness numbers come along remember… neither productivity nor the sky is falling as much as you might fear.